It’s just gone 1pm. I’m sat outside a bar in Roncesvalles, there’s a cold wind.
My day started at 5am, I tried to be as quiet as possible while getting up but after someone snored all night I didn’t feel too guilty about the noise I made.
By half past I was paid up, stamped and ready to go.
It was still dark outside, I had my head torch just in case but with the odd street light I could just about make my way.
As I make my way out of St-Jean-Pied-de-Port my thoughts are with those pilgrims I’ve left behind, and how much today is going to hurt…! The climb starts immediately, a few flat stretches, even the odd slope down, but in general I’m going up and it’s getting steeper all the time. The air is cold, but as the climb steepens the sweat pours from my head. I keep looking back, watching for the sun rise which is taking it’s time behind me. As I get close to the gite at Honto, 5km from where I left, the sun rises, showing the whole valley below me is now covered in a blanket of thick fog, the town I came from cannot be seen at all.
Pilgrims from the gite are beginning to make their way up the steep slopes, I’m the only one from the town back down in the bottom of the valley. The lane turns to track and then to footpath. I pass people only to have them pass me again as I stop to take the odd photo. We get back onto tarmac as the lane evens out and follows the ridge. I pass another ‘auberge’ (hostel) high up towards what I thought to be the first summit… Yeah no!
Most of the walking is on single track lane, which makes it easy on your feet but you would not believe how high you go. By 8am there are blue skies all around, the sun is out but the air is fresh. The views are amazing.
As I make my way past a fountain, a girl points out that I’m stepping across the border from France to Spain. If I hadn’t been told I would never have known. The walking starts going down but I’m deceived, I walk out from a wooded track to find one last climb up and finally…. I’m at the highest point (on my path at least) of about 1450m. I’m lucky because there are much higher peaks around me.
The walk down is steep, muddy, wooded and goes on for far longer than I expected. After several swear words at the fact I’ve nearly tripped on tree roots, had to climb back up a hill and slid down the rest of the track, I emerge faced with what was once a huge and important monastery. (It’s still important as it homes pretty much all the pilgrims coming over the mountain).
I must be one of the first to arrive, it’s quarter past twelve, I organise a bed and have my pilgrim passport stamped. I cannot enter until 2pm though. So I dump my bag and move to the cafe/bar.
Just after 2pm I go in, it’s so busy. People everywhere. I find my bed, but it’s so so busy I scrap all plans to shower and wash my gear. (I know I’m a right ol’ gypsy, I don’t care, you should have seen the chaos).
I lie in bed, cold, no blanket. Tonight I sleep fully dressed! 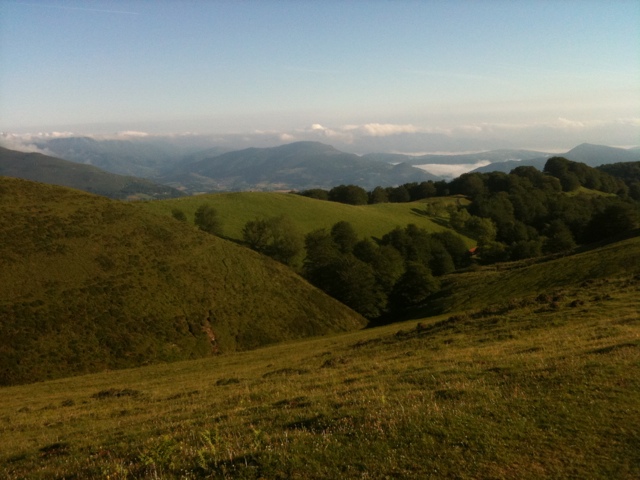 1 Response to Day Thirty One