Ahhhh… The linen, the pillows….so comfortable. So why do I get up at 7.30am!!?!
Well now I’m up I may as well have breakfast. Afterwards I ask reception what time the shops open in general. Being Monday, some open at 10am, the others 4pm…? Ok, fine… I head out and walk the city again, taking in the architecture, the layout, stopping at odd cafes for an espresso or two. I find myself no new boots. I walk further afield but to no avail… I don’t trust anything else on my feet! After hours of walking (yes I’ve probably walked as far today already as I did yesterday, just without the backpack), I find a shoe repairer in a little shopping centre (I mean little)! The man speaks Spanish, I speak English, I have no idea what he’s asked me or saying to me but I show him my soles, I grasp he can fix the heals in about 10mins. I take them off, sit and wait. Less than ten minutes later he hands them back to me saying more that I don’t understand. All of a sudden I understand, he’s fixed them for me but he doesn’t want paying as I’m a pilgrim on the road to Santiago. I thank him lots in English and Spanish, (yes I do know the odd word)…! I hope my boots will last to the end, I have a nagging feeling the soles won’t but the heals should now….
The rest of the day is spent exploring and relaxing, after lots more walking of course!
I am now packing my gear as I want to leave early tomorrow. I have gauged walking days in my guide. With no excessive days, I should be in Santiago de Compostela by the 20th of June.
I do still have to walk to Finisterre after that, but for now my sights are set. My feet still look rough, but I haven’t had a new blister for some time. My left foot is still slightly swollen and sore but unless something drastic happens I will get there in one piece!
I’d just like to say to everyone who’s following me. Thank you, I hope I’m not boring you with my rants & ravings…. If you like, please feel free to forward on to friends & family, retweet on twitter, update status’ on Facebook! Let’s use the digital world to our advantage and do some good by making some money for UNICEF to help children around the world. 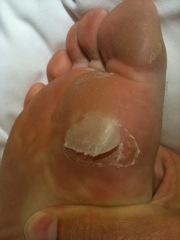