I slept really badly. I think it was a combination of being too hot, realised my way was almost over and having snorer’s all around me… When I did finally fall asleep I was woken shortly afterwards by a very annoying woman rustling and shining her torch in my face just after 4am. I bet she only started in the last 3 days!?!
I get up dead on 7am, I pack my things before getting Bruno up. We leave just before 8am.
This morning the walking was up and down but very enjoyable despite having to pass dozens of day packers… Thats right there is a real sense of difference between those that started back in France (even St Jean Pied du Port) and those that started in the last week. Maybe I should be more tolerant of them… Nope, not gonna happen, and I am a tolerant person!
We pass through beautiful little villages with stone footpaths nearly all the way. We pass the first of many eucalyptus woods, which I’m surprised to see. The weather is grey and overcast and slowly as the day wears on the drizzle starts to fall.
Ooh, I forgot, we did stop in Melide and finally Bruno found me a cafe serving ‘churros con chocolate’, I couldn’t believe what I’d been missing, damn the sugar rush alone was superb, give me a couple of espresso’s as well and watch me bounce of the walls… Amazing stuff, now I want more!
Ok, so back to the day… The rain came and my poncho came out, much to Bruno’s amusement. The walk began to drag along with my feet, my left foot wanted to fall off it was so tired and achy.
At last we reached Arzúa and we’ve found an albergue with wifi and hot water, amazing! We could be in Santiago tomorrow if we wanted but I rather like the idea of arriving at sunrise on Sunday?!
Today is so miserable I doubt I’ll go out again but sometimes it’s good just to relax…
If anything exciting happens I’ll add it later…
Ps. If anyone knows of jobs going in the area of the Lake District, please let me know, I think I want to move back up there…!?!
Pps. I have two new nicknames – Captain UNICEF or my favourite UNICEF Boy!?!
I have pilgrims trying to source a cape so I can enter Santiago in costume??? Oh dear… 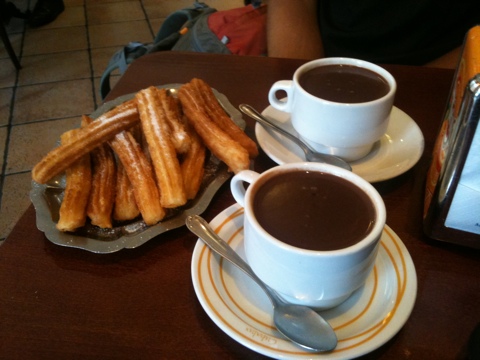